In 1943 a young woman had a baby and gave him up for adoption. After she gave birth, she spent the next three months at the Salvation Army Hospital in Los Angeles, nurturing and preparing to release the baby for adoption. That was the last time she saw her baby—until 40 years later.

During those 40 years of separation, she prayed that one of her sons would become a minister. She had three sons and named them Paul, Mark, and Peter—but they did not become the minister. Instead, the son she gave up for adoption became the minister. And that son is me, Mike Bayer.

My adoptive parents were not Christians but did permit me to start going to a Presbyterian church when I was about 10-years old. The church became a second home to me and I remained there until after marrying Judy and being discharged from the US Marine Corps. I felt my first call into ministry after a Jr. High School youth camp.

The Sunday after the camp, while sitting in the back row of the church I saw someone new in the pulpit. The closer I looked—the more the guest speaker looked like me: But a little older. I asked the person next to me who the guest speaker was and they looked at me in surprise and said, “That’s Pastor Bob—you must not be awake yet.” When I looked back—sure enough, it was Pastor Bob (Pastor Bob Prentice).

That afternoon I spoke to Pastor Bob and asked him what he thought happened to me. His words remain with me to this day, “Why Michael—I think you saw a vision of yourself—I think God means for you to be a minister.”

After returning from Viet Nam and shortly before my discharge from the Marines, I was listening to Rex Humbard from Cathedral of Tomorrow one Sunday Morning. Rex said that
even if you had received Christ a hundred times—you needed to make sure of your salvation once and for all. And on that morning—January 8, 1968, I did.

After returning from a week long conference at Campus Crusade for Christ later that year (1968) I was asked to give a report of our experience. Since we had spent the week learning the “Four Spiritual Laws” and how to share them—that’s what I did. I actually got to stand in that pulpit that I saw myself in many years before and share the salvation of Jesus Christ with my “home church.” Over the next few weeks, both Judy and I shared the Four Spiritual Laws with many people in the church. 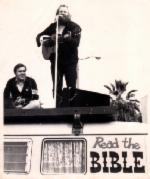 In 1971 while I was finishing my bachelor’s degree at Cal State Long Beach, I was hired as the Youth Pastor of the Los Altos Brethren Church in Long Beach California.
(Photo Left: Barry McGuire and I ride atop a VW bus in downtown Long Beach during a citywide outreach.)  Judy and I ministered in Brethren churches for the next seven years including pastorates at the Rialto (now Mosaic Rialto*) and Lakewood California Grace Brethren churches. During this time I also attended Talbot Theological Seminary in La Mirada California (part of Biola College).

Our time with the Brethren church ended after we both received the Baptism of the Spirit. Over the next 12 years, the Lord used us to plant two churches, one of them the San
Pedro Calvary Chapel which later became a Vineyard Church. Judy and I also founded and hosted a radio program on KYMS called “Just Men, Just for Jesus” and appeared on several Praise the Lord programs on TBN.

For the past 19 years, Judy and I have been ministering primarily to seniors at the Village Church of Laguna Woods, an Assembly of God Church.

God’s call on my life is as a pastor, teacher, and encourager. Over the past 38 years of ministry, God has permitted me to see and experience His hand of Grace over and over.

*Mosaic Rialto: I was recently blessed to find out that Mitch Cariaga, a member of the youth group at Rialto Grace Brethren Church when I pastored there (over 30 years ago) is now the lead pastor of the Church.  Under Mitch’s leadership, they closed the old church and launched a new church ministry at the same location called Mosaic Rialto.

Also, Brent Strawsburg who was in the youth group when I was the Youth Pastor at Los Altos Grace Brethren Church is the lead pastor at Shore Life Church in Huntington Beach California.

It is wonderful how God puts His people in our path to lead and guide us to Him. My grandmother was God’s gift to me as a little girl living through my parent’s divorce and being raised by an aunt. My grandmother made sure I got to Sunday School and Church and prayed for me and talked to me about Jesus.

A missionary family moved in next door to us and invited me to attend the Billy Graham Crusade in Los Angeles in September 1962, my senior year of High School. It was there that I gave my heart to Jesus and received him as my Lord and Savior.

After I received the Lord—He immediately birthed compassion in my heart for people and I followed that leading and started studying to become a Registered Nurse.  For a time I thought I would become a medical missionary. But God had other plans. I completed my nurses training and became an RN and also a Youth Pastors wife when my husband became the Youth Pastor of Los Altos Brethren Church.

I continued to work as an RN nd help my husband in ministry and through his last two years of college and then seminary. During these years God used me as an “encourager,” both as an RN and in ministry. And it is encouragement—the gift of “exhortation” (Rom. 12:8) that God continues to use in me to minister to the Body of Christ.

While my husband was serving as the Pastor of Lakewood Grace Brethren Church (CA), I attended a retreat at Arrowhead Springs. It turned out to be a Spirit filled retreat, and a Spirit filled weekend for me. My heart was longing for more of Jesus and when an invitation to come forward for prayer was given—I went and received the Baptism of the Spirit.

That same night a prophecy was spoken over me and I was given Matthew 15:30-31, “…and they laid them down at Jesus’ feet and He healed them.” God showed me that this passage was for both my husband and me in ministry—we were to bring people to Jesus and He would heal them.

Together with my husband we have planted churches, birthed ministries, taught the Word, encouraged others and brought people to Jesus.